Here’s another weird thing I got from eBay. It’s a mock-up for proposed Ultraverse advertising on city buses. It’s not very big, just a couple of inches tall and about seven inches wide.

Here’s how it was described in the auction:

A rare relic salvaged from the fallen Malibu Comics empire… When an ad agency was tasked with creating bus ads for the Ultraverse, they sent Malibu execs this mock-up of how the projected campaign would look.
Recovered from an ex-Malibu employee who was there.
Insanely rare. Only a handful ever made.

Here is a picture of an actual bus advertisement, courtesy of Ultraverse co-founder Tom Mason (he says it came from the advertising agency and is dated from 1994). 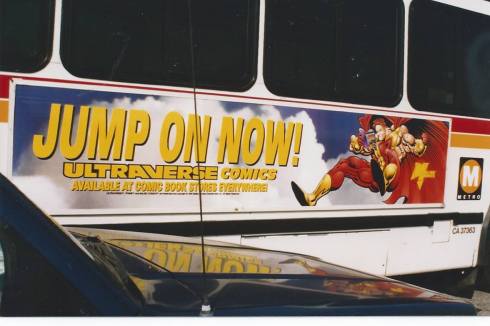 You can watch one of the buses in action (sort of) in the 1994 movie The Chase, starring Charlie Sheen. No, seriously, you can watch it on Youtube. At about the 10:50 mark you get a quick glimpse of this: 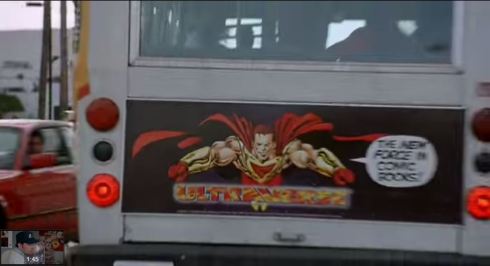 And at that point you really should quit watching.

I picked depluto as a screen name years ago when I signed up for AOL. I still use it for a lot of things including posting on some forums. END_OF_DOCUMENT_TOKEN_TO_BE_REPLACED
This entry was posted on Wednesday, September 16th, 2015 at 9:39 pm and tagged with Advertisements, Charlie Sheen, TDI, The Chase and posted in Advertisements, Other stuff, Recent scores. You can follow any responses to this entry through the RSS 2.0 feed.
« Hardcase Print
Malibu Ultragear »

One response to “Early Advertising Campaign”