Ultraverse Premiere 0 (remember when 0 issues were everywhere?) is the book you received for collecting all the coupons that were scattered around books at the launch of the Ultraverse. It’s a collection of short stories featuring several characters; as an added bonus the cover art was done by Jim Lee, who was then red-hot from working on the X-Men and Wildcats.

It’s been on the checklist from the beginning, but I’m adding a second version. Several hundred of these books were somehow distributed with the pages out of order.

The picture below on the left is what you see when you open a regular copy. The error copy’s first page is on the right. That page is part of a two-page spread that should have been near the middle of the issue. 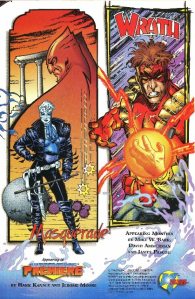 I suppose it could have been pretty confusing to get that one in the mail.

But here is why I am adding it to the checklist. In the Collector’s Guide to the Ultraverse, it is mentioned as a variant. And with only a few hundred copies I suppose that does qualify as pretty rare, especially where 1990s comics are concerned.

I have a copy that is signed by Jim Lee. Perhaps the error copies were distributed at conventions and nobody noticed until it was too late. Who knows?

In any case, it’s nice to make an update to the checklist even if it is for a book that had been sitting in my closet for years.

A pretty fat stack of books here. Too bad there are no hologram covers (that I know of!) but there was the usual Ultra 5,000 and a single annual.

The relaunch had a variant for the Infinity issue and a painted variant for No. 1. These variants made up 20 percent of the print run.

Nightman and Gambit was a pretty short mini, with a single variant for No. 1.

And a team-up with Wolverine, signed and unsigned editions. Some of the signed versions have American Entertainment COAs and the others have Dynamic Forces COAs but everything else is equal.

A lot of stuff going on around NM-E, probably the coolest-looking of the Ultraforce action figures. 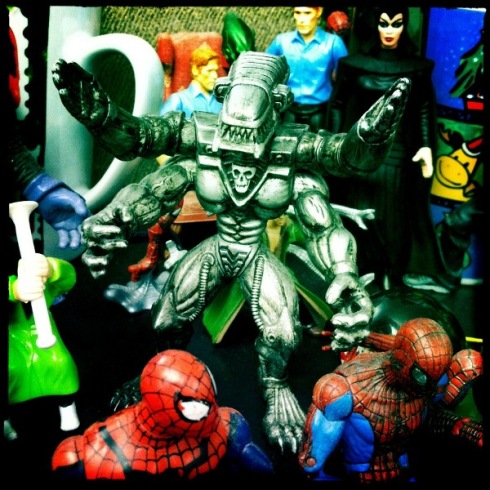 That’s it for the desk shots. I only have six on display although I have a box at home that has a full set still on the cards (except for the 504s). Although I think I might have a Ghoul stuck in a drawer around here somewhere …

He looks like he is getting ready to kick the crap out of that glow-in-the-dark zombie woman right in front of him. 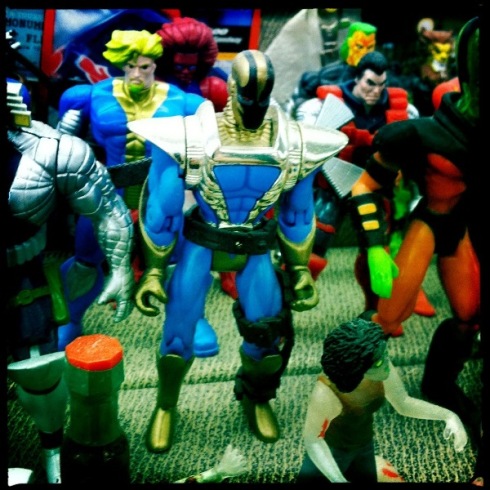 Reminds me of the line from Spaceballs, “I knew it, I’m surrounded by a-holes.”

Again, not really “in action.”

It’s either some kind of mechanical glider or a Russian gulag’s interrogation chamber.

OK, maybe none of these are really “in action.”

Judging by the level of dust, I would say Topaz has not seen any action in a while.

Nightman toasts you with an invisible beer!

No beer for the lurking X-Men.

It might surprise some of you to know that a guy who writes a blog about a defunct line of comic books is something of a nerd. This does not surprise people who know me, however.

Anyway, like a lot of nerds, I have a desk at work loaded with action figures. Included are several Ultraforce figures. I’ll snap some pictures of them using the Hipstamatic app, since I’m cool that way. 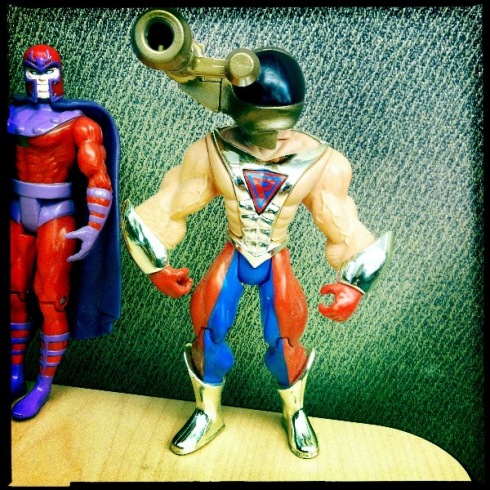 Let’s start off with Prime and his head-mounted bazooka-thing.

Spotted a couple of interesting auctions on eBay this week. A little more than I want to spend, although I wouldn’t mind adding both to my collection.

The first was a Prime standee, almost five feet tall. I already have a Rune standee that is the same size, but it is stuck up in my attic since I don’t have any place to display it.

The auction will probably be over by the time most people read this, but here it is anyway.

The second thing I saw was a nice Prime shirt that looks to be in pretty good shape. This auction is running a little longer with a BIN of $35 and free shipping. Cool shirt (a little small for me, I prefer XL or even 2XL) but I still wouldn’t spend more than $20 for it. Who knows, maybe I will make the guy an offer? 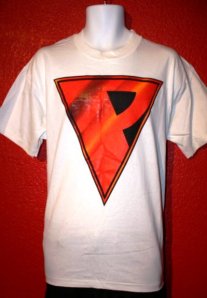 First time I have seen this shirt though. It looks a lot better than any other Prime shirts I have seen.

A few weeks back I found a shop in Tampa that had a ton of comics for 10 cents each. I found these in those boxes, although the only Ultraverse connection is the card inserted randomly; I’m pretty sure these are all just common cards from the first set of Ultraverse cards.

It gave me the silly idea that maybe I could put together a run of all 90 cards, still in the polybags with a comic. But when it comes to collecting Ultraverse I have first-priority books and second-priority books. This would be down around sixth priority.

Still, for 10 cents I couldn’t pass them up. 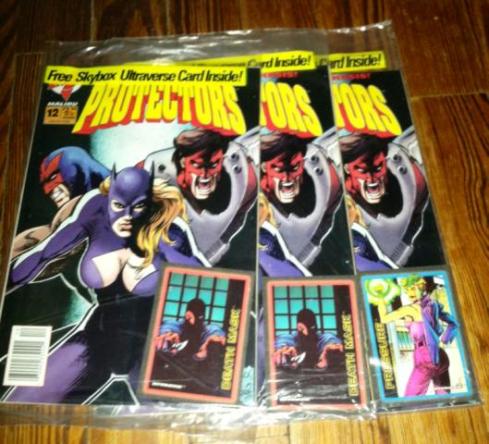 In case anyone else wanted to check out the shop (Wonder Water Sports Cards, Comics and Games), here is their Twitter feed and Facebook page. I left a lot of books there.