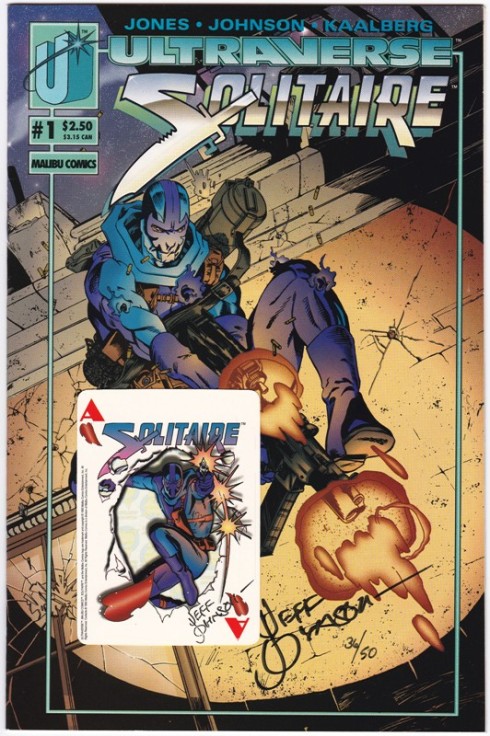 I thought this was a pretty good find. Solitaire 1 by itself isn’t rare at all, but this is one of the lowest runs I have ever seen for a Dynamic Forces signed version … just 50 (I got No. 36). This was the book that came in the black bag with a card. I’ve busted open a few and just about every one I have opened had an Ace of Clubs. After a lot of searching I found an Ace of Diamonds on eBay. And now I have a Heart. Since the promo card is a Joker (very easy to find) that just leaves me one more card for the set. Pretty low on my list of priorities, though.

For some reason Solitaire was the focus for three different Dynamic Forces signings: this one, a 75-count set that had the first four issues signed by Jeff Johnson and a 7500-count set that was just the first issue. There weren’t too many other DF Ultraverse books; this post has the list as I know it.

I picked depluto as a screen name years ago when I signed up for AOL. I still use it for a lot of things including posting on some forums. END_OF_DOCUMENT_TOKEN_TO_BE_REPLACED
This entry was posted on Wednesday, October 1st, 2014 at 9:00 pm and tagged with Dynamic Forces, Jeff Johnson, Solitaire, Ultraverse and posted in COAs, Recent scores, Signed books. You can follow any responses to this entry through the RSS 2.0 feed.
« Card sketches
Prime sketch »