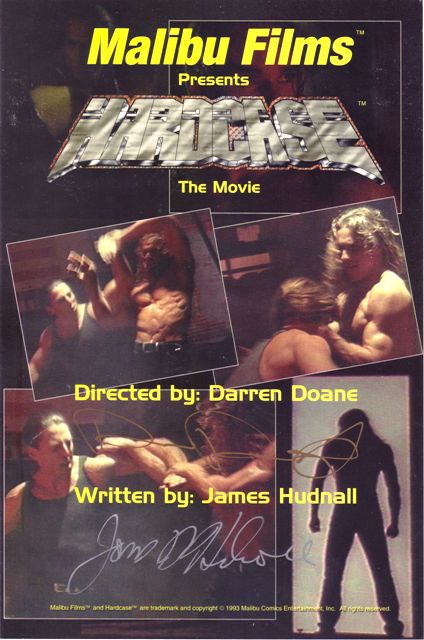 I bought this card a while back (it’s about the size of a comic, thinner than a backing board). Like it says, it’s a promo for the Hardcase movie and is signed by director Darren Doane and writer James Hudnall. So I looked for the movie and couldn’t find it. Comic shops, eBay, fan groups … nothing turned up.

Most Ultraverse fans know about the Firearm movie that came packed with the 0 (zero) issue … I also have a card for that movie. Now that one I have seen. But this Hardcase movie … I had no idea.

So I turned to the Ultraverse Facebook group. If you are a fan of the Ultraverse at any level, that is a great group to join. Many of the original creators drop in and offer up great stories and nuggets from their days working at Malibu. Very cool.

So I checked in over there and found out that there never was an actual movie, just a 30-second trailer. Tom Mason, one of the Ultraverse creators, had this info:

Action movie star Gary Daniels was Hardcase. The short teaser was done not for us or even the direct market but more as something to show off the movie potential of UV properties. And we could also show it off on the convention circuit.

Both Darren Doane and Ken Daurio were on staff, with another guy Larry Gitlin, at Malibu during that time. They had a division inhouse called “Malibu Films” that was responsible for all of our promotional videos and short films. After the division was shut down, Darren went on to make music videos and Daurio started writing screenplays.

So there you have it: A bit of a background. But I still haven’t seen an actual hard copy of this movie in person. A fellow Ultraverse collector has one, and he donated the pictures of the sleeve below. The movie itself is a regular VHS tape. It’s just one more thing for me to keep on my list.

I picked depluto as a screen name years ago when I signed up for AOL. I still use it for a lot of things including posting on some forums. END_OF_DOCUMENT_TOKEN_TO_BE_REPLACED
This entry was posted on Friday, November 1st, 2013 at 12:56 pm and tagged with Darren Doane, Firearm, Gary Daniels, Hardcase, James Hudnall, Malibu and posted in Other stuff, Signed books. You can follow any responses to this entry through the RSS 2.0 feed.
« Long Live the Pump!
Ultraverse Secrets … »