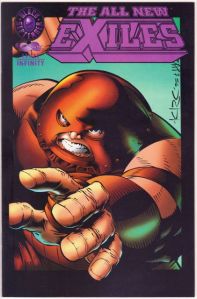 Out of all the titles that were relaunched following the Black September event, All New Exiles was the only book that got an extra variant cover for its Infinity issue. Maybe it was the association with Marvel’s ultra-popular X-Men (their long-time mutant nemesis Juggernaut is featured on the cover … one online retailer describes this as a “guy w/red metal dome on his head reaching out to reader”) that did it.

This is my favorite cover from the relaunch, just a simple design and image that lets you know the Marvel Universe has arrived in the Ultraverse. Or at least on Earth-93060, as the Ultraverse is now known in the shady bottom of Marvel’s dustbin of universes. The All New Exiles only lasted 11 issues (12 if you count the Infinity issue).

It’s not the easiest book to find but it pops up on eBay here and there and never sells for too much.

Issue No. 1 also had an extra variant cover. It’s not as interesting, but $1.50 seems like a pretty good value for a 64-page comic. No extra charge for the Ultraforce story that was included.

This is an easy book to find for a buck or less, though. Check mycomicshop.com if you’re in a hurry.

I picked depluto as a screen name years ago when I signed up for AOL. I still use it for a lot of things including posting on some forums. END_OF_DOCUMENT_TOKEN_TO_BE_REPLACED
This entry was posted on Tuesday, May 10th, 2011 at 6:31 pm and tagged with All New Exiles, Marvel, Ultraverse, Variant covers and posted in Variant covers. You can follow any responses to this entry through the RSS 2.0 feed.
« The Infinity issues
Flood Relief »