After Marvel bought Malibu, they decided to relaunch the Ultraverse with mostly the same titles and some cross-over characters from the Marvel Universe. I’m not going to sit here and judge the quality of the stories but it was the beginning of the end for the Ultraverse line. Prime and Ultraforce made it the longest, lasting all the way to issue No. 15 before the plug was pulled. 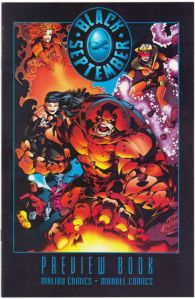 There were a few bright lights in the relaunch but nothing that really matched the first year of the original Ultraverse. Anyway, the Black September event was the cornerstone moving forward.

There was a thin preview book that profiled the upcoming titles. I can’t remember where I got it, and it’s not too common on eBay but it looks like a comic book so we put it on the checklist.

The Black September Infinity book (I would make an infinity symbol there but I’m not sure how) came in two versions (all of the Ultraverse titles were relaunched with an Infinity issue). One is mostly black (the regular titles were entirely black except for the title) and the other is a regular illustrated cover. These are both common books — don’t break the bank here. I’m not sure if one was printed more than the other, but I think the black cover one feels a little more common. 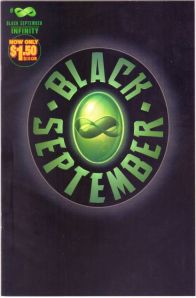 I picked depluto as a screen name years ago when I signed up for AOL. I still use it for a lot of things including posting on some forums. END_OF_DOCUMENT_TOKEN_TO_BE_REPLACED
This entry was posted on Monday, May 9th, 2011 at 1:50 am and tagged with Black September, Marvel, Prime, Ultraforce, Ultraverse, Variant covers and posted in Variant covers. You can follow any responses to this entry through the RSS 2.0 feed.
« Elven “foil edition”
Eliminator black cover »